Life Without Concrete . . . is Solid, Dry and Warm. 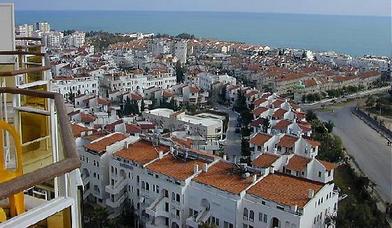 Try telling anyone in Turkey that you’re building without concrete and you’ll be greeted with a wave of resistance. Not that the concrete epidemic is limited to Turkey. It has spread like an insidious grey disease over most of the Mediterranean and the Middle East, ugly rectangular pustules erupting everywhere you look.

The Cold Hard Facts about Concrete.

But really what’s wrong with concrete? Isn’t it humanity’s answer to rock? In fact there are some occasions where even I’ll admit that concrete is perhaps the lesser of a few environmental evils. It doesn’t take too long to break down for one thing. But on the other hand there are many reasons, not just ecological, why concrete isn’t such a great idea.

1. Concrete is one of the 2 primary industrial producers of CO2 and the greenhouse effect. (The other is fossil fuels)

2. Concrete is a primary contributor to the urban heat island.

4. Concrete dust generated in house demolitions or earthquakes is a major source of dangerous air pollution.

1. The concrete industry is basically a racket. In the United States alone, concrete production is a $30 billion per year industry, considering only the value of the ready-mixed concrete sold each year. Concrete’s use in the modern world is only exceeded by the use of clean water! It’s big business.

2. Locals in many countries are persuaded that they need concrete (to be modern, or to create strong housing). Building codes and government quangos in most countries work in league with major cement manufacturers to create laws all but forcing people to use concrete. This has generated an utter break-down in local arts and skilled artisans (stonemasons, cob plasterers etc.) I couldn’t find a plasterer left within a 50km radius from my house, for example.

1. Concrete doesn’t last particularly long before it starts to degrade (about 50 years). Without reinforcing it with steel, it’s actually quite brittle.

2. It wicks up water giving it a damp, cold feel in wetter climates.

3. It absorbs heat and then radiates it back out, thus creating uncomfortable living conditions in hot countries.

But can we really live without concrete these days?

I set myself a target of zero concrete on my land. So far I’ve managed to stick to that target by finding alternatives. Most of the time the alternatives turned out to be far more efficient than concrete would ever have been, though I’ll admit that finding water storage solutions without using cement is tough.

Where do we normally need concrete?

1.Foundations
I’m now at a complete loss as to why concrete has become the major foundation material of our day. It wicks up water, it’s crap for drainage, and it’s not even particularly strong unless you reinforce it. (As I said, there’s a racket going on). Unless you are building a multi-story car-park, there are plenty of better options.

The Greeks had no Portland cement, nor did the Mayans nor the Egyptians. Cob houses in the UK have survived for 500 years or more without a foundation at all! The Romans utilized a kind of concrete but it was made with lime which works very differently. Unlike Portland cement, lime breathes, dries, and rids itself of water fast. It's perfect for a wet climate.

For a natural home, I'd recommend the rubble trench foundation any day. You can read more about that here.

2. Mortar.
Cement is often used for mortar between bricks or stones. It actually serves its function better here than in the foundation or plaster. But there are plenty of alternatives. We used a cob mix with lime as mortar for a small stone wall with great results. When restoring ancient buildings, Portland cement is a big no no. It actually eats at the ancient stones, and because it isn't breathable, the houses are often subject to mold and damp. What you should be using is lime mortar instead.

3. Plaster
Again, I have no idea how concrete became slapped on walls as a coating. In winter it’s cold (because it doesn't breathe and holds the damp) and in summer it’s baking hot. Lime plaster, earthplaster or cob are more attractive, have less impact on the environment and breathe. Your house becomes toasty in the winter months and cool like a cave in the summer when using these alternatives. Furthermore, if you are building with earth and plaster with concrete, you risk the plaster cracking and falling off. This is because clay in the earth will swell when it gets wet, and contract when it dries, where as Portland cement has no flexibility. Hence the cracking.

4. Lining pools
This is the only use of concrete which is hard to beat environmentally. Alternatives are fibre-glass or plastic liners which have a worse environmental impact. Concrete pools (if well-designed) often look more attractive than fibre-glass constructions. However, if you’re a die-hard eco-lover (or just plain stubborn like me) then bentonite clay is an option.

Q: Did you say lime plaster back there? Isn’t lime just as bad as concrete?

The Greeks came up with lime plaster about 2000 years ago, and its advantages over Portland cement are numerable. It’s weather proof, deals with moisture effectively, frost-proof, permeable, soft, flexible and proven to work over centuries. But most importantly using lime reduces the greenhouse gas effect. Lime has its own life-cycle whereby it changes from limestone to quicklime and back to limestone again. During this time most of the CO2 released during the manufacturing process is re-absorbed during the lifetime of the plaster. In this way lime is almost carbon neutral. 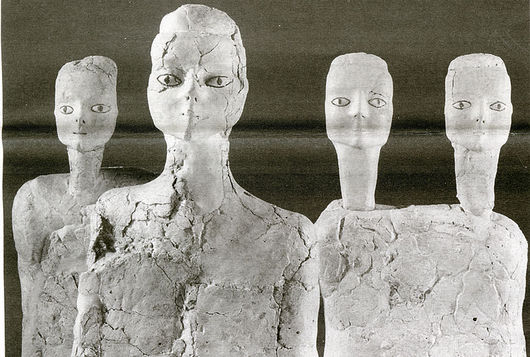 Lime plaster statues from Jordan from 7000 BC.
Disclaimer: All the content in The Mud Home website is provided for informational purposes only. The author undertakes no responsibility for any person or entity who chooses to use the information on this website. It is not intended to be a standard and should not substitute for the exercise of good engineering judgment by engineers. It is the user’s obligation to make sure that he/she uses the appropriate practices and consults the appropriate experts when building. It is the user's obligation to make sure they are following health and safety guidelines. The author is not responsible for any accidents, injuries or damages to persons or property incurred while using the information presented in this website.
Some blog articles refer to the use of lime. Please note, lime is caustic and can cause burns. Read The Mud Home guide to using lime safely here.
The Mud Home  Copyright © 2013  Atulya Kerry Bingham