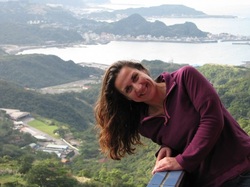 I was slumped in a plastic red chair, one of forty or fifty such chairs lined up on an uninspiring block of concrete that called itself the The Jetty. They were the sort of chairs you might find anywhere. Mcdonalds. The tax office. Yet this was Pulau Pangkor, Malaysia, and I was waiting for a ferry to the main island.

As I stared out at the watery morass yawning navy under a lazy afternoon sun, a man and a woman in their mid-thirties wandered up. Groaning and sighing, they threw their backpacks onto the seats in front; packs that were worn and stencilled with a geometry of dusty lines. Aha, experienced travellers. We soon struck up a conversation.

The pair was Czech and had been travelling non-stop for over ten years. This was the sort of life I’d always dreamed of, a life of endless peregrination interrupted only by short bouts of sporadic work, a life of careless meandering, meditating, and bumming about on sugary beaches. What could possibly better such an existence? So imagine my surprise when these two comrades in wanderlust explained that now after a decade of mooching they had decided to give it up and return ‘home’.

“There comes a point,” the tousled-haired man said, “when it all starts to become a bit meaningless, moving here, moving there. After I’d seen my fiftieth waterfall, swum in my fiftieth blue cave and peered in my hundredth temple, I began to wonder, to what end?”

As I listened, I puckered my brow and posed myself the same question. Why am I doing this? To what end do I explore?

The reasons we travel are as manifold as the countries of the world. Some of us are on elaborate personal escape missions, others are seeking an exotic unknown. We might travel for work or education, as a refugee, or for a holiday. Sometimes there is no choice, and we find ourselves hurled out of one place and into another, the skin of our homes rucking beneath our clawing fingernails. Other times it is we who voluntarily make the leap into clear, empty space. However, whatever the initial reason, our displacement always comes brandishing the same tests. The well-traversed landscape of our inner self is suddenly thrust into a matrix of unfamiliarity, and this friction of the known rubbing against unknown, generates sparks of huge potential.

As the three of us, one British Turk and two Czechs, sat before the strait of Malacca watching gulls swoop haphazardly over the oscillating blue, I recalled what I had been doing a decade ago, when these two had begun their world expedition.

It had been late August 2001 and it was my first trip to India. Now, the subcontinent of India is an entire book unto itself. It is the one place on Earth you can expect to witness what would normally constitute a lifetime’s worth of experiences within a single month. I was in the Himalayas and suffering altitude sickness. I had also, as chance would have it, run into a clairvoyant.

Most often we have no idea of the most significant encounters until they are well over. My meeting with the psychic was no exception, for it was the person who inadvertently gave me not only my reason to travel, but also my method, a method I still cherish to this day. The word ‘psychic’ conjures up all manner of pictures, so lest you are imagining a toothless, painted Saddhu with dreadlocks down to his knees puffing on a pipe full of charas, I should put you straight. This was India, anything can happen. My clairvoyant was a north London Jewess called Karen and I had met her on the groaning bus to Srinigar airport.

“Look ‘ere Sanjay, I hope you’re not pissin’ me about with this bus. I’m gonna flippin’ kill you if you are,” she barked.

It was difficult to ignore her, and we soon struck up a conversation. Karen didn’t look much like a clairvoyant, and when two weeks later she tentatively broached the subject with me, I was more than a little sceptical. I didn’t even believe in the afterlife at the time. However, then she said she had a message for me from my dead mother. She got my mum’s name right, and promptly began to sing a song that only my mother used to sing to me. I shivered, and began to wonder. We travelled on through the rutted moonscape of Ladakh and down into the marijuana laden hillsides of the Kulu valley. Things turned progressively spookier. Karen would receive her otherworldly messages via doodles she would etch in a small notepad that she carried everywhere. She took to obsessively drawing two sticks, or towers, or was it the number 11? She fretted to me that she didn’t know what it meant, or why she kept drawing it. Eleven. Two towers. It was September 2001.

No more than two days later, there in the lush, untouched foothills of the Himalaya, I suddenly noticed something peculiar. A silent mishmash of people had gathered outside a TV screen in the local corner shop. For some reason they were watching a movie of a plane crashing into the twin towers over and over again, and all of their mouths were agape.

This is no lie, I can assure you. When I finally learned that it wasn’t a movie, it shook me right down to my sandals. I then began to suspect that Karen was perhaps in touch with something I didn’t really understand. The psychic was a whole new country in itself as far as I was concerned, and as is often the case when we are faced with the unknown, I felt wholly disturbed.

Travelling with Karen was both exhausting and exhilarating, because there was never a plan. We would set off with no goal in mind and she would literally ‘pick up’ clues. It might have been the inviting way a tree twisted about its trunk, it might have been a trail of playing cards someone had discarded, “Did you notice they were all spades? I wonder why?” Sometimes a person would cross our path and tell us a place to go, other times a rickshaw driver would leave us somewhere random, or a dog would seem to want us to follow it. These excursions lead us on magical mystery tours where suddenly the hackneyed sights of guide book counsel were replaced by small (or sometimes great) discoveries of deep personal significance.

It took me a few years to integrate those four weeks back in 2001, but now I’m grateful to Karen (not least because I no longer have to lug that useless brick of travel lore, the Lonely Planet, around in my backpack). My reason to wander has become my method. I board planes and trains, jump in taxis and rickshaws, all following a peculiar amalgamation of outside clues and inside hunches. These intuitive odysseys have led me to hidden shrines, virgin beaches, chance meetings with friends from other countries, secret caves, delicious meals, astounding views, enlightening conversations with nuns and monks, antiquated coffee shops, beautiful and quirky guesthouses, ashrams and more.

I returned to my ubiquitous red chair on a nondescript jetty in Malaysia. Soon I began to tell my Czech friends about my travels, about Karen the clairvoyant and more. I thought I saw a glint in their eyes as the story unwound. The woman moved in closer, the man nodded thoughtfully. Our ferry to the mainland appeared as a white dot in the distance, and we gossiped until it grew into the hulking ship that docked in front of us. In fact, we talked all the way to the main island, and were still prattling when we alighted and boarded the bus to Kuala Lumpa.

Travel is about traversing from the known into the unknown, and it is at that crossing point that both meaning and magic make themselves felt. When travelling becomes the tried and tested, when we follow the same internal routes day in day out, regardless of which country we are in, then eventually our journeys are robbed of their meaning. We will ask “to what end?” The trouble is, that self-same unknown disorients us, scares us, and so we shy from striking out without a guidebook in our hand.

The comfortable coach steamed along the Malaysian highways, air conditioning rushing over us. In a way it could have been any bus, anywhere. Yet, it wasn’t. A tropical rain began to fall. It slid down the windows, carving translucent tracks through the caked-on dust. As we approached Kuala Lumpa the couple turned to me, both of them suddenly becoming quite animated. It was curious really, because it turned out they were searching for a meditation centre. They told me they had never really found what they were looking for, that the right place had never been forthcoming. All over the world they had tried, but everything was too dogmatic, too prescribed. Did I know anywhere?

I sat back for a moment and thought. Reaching into my backpack I pulled out my pen and my notebook, before jotting down a name. I ripped the sheet off the pad and handed it to them just as the bus lurched to a halt.

I wonder if they ever went there. I wonder what happened if they did.
You can also read this article in Inkblot art magazine, Taiwan.
Disclaimer: All the content in The Mud Home website is provided for informational purposes only. The author undertakes no responsibility for any person or entity who chooses to use the information on this website. It is not intended to be a standard and should not substitute for the exercise of good engineering judgment by engineers. It is the user’s obligation to make sure that he/she uses the appropriate practices and consults the appropriate experts when building. It is the user's obligation to make sure they are following health and safety guidelines. The author is not responsible for any accidents, injuries or damages to persons or property incurred while using the information presented in this website.
Some blog articles refer to the use of lime. Please note, lime is caustic and can cause burns. Read The Mud Home guide to using lime safely here.
The Mud Home  Copyright © 2013  Atulya Kerry Bingham