﻿﻿20 pages of information and photos plus a series of earthbag and mud building emails. FREE!
Yes, I'd like that Earthbag PDF!

Foundations For Your Natural Home

If you are building nearly any kind of natural home (strawbale, cob, earthbag) you are not going to want a standard concrete foundation. Portland cement foundations have been around for less than a hundred years. Buildings have been built for millennia. In the eastern Mediterranean it's common to see structures still standing over 2000 years after they were built, without a drop of Portland cement. 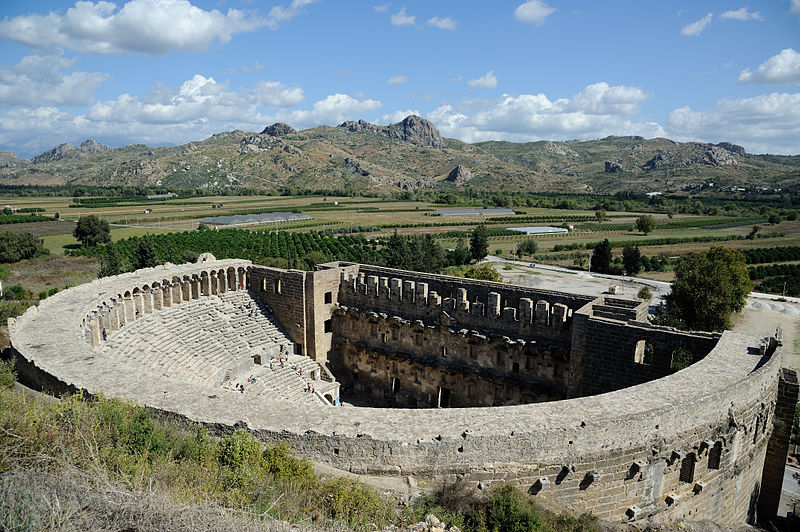 Aspendos amphitheatre in southern Turkey. Still going strong after 2500 years.
Why not concrete?
Using the ubiquitous concrete footings is not just about being ecological (the carbon footprint for producing the stuff is massive). People often have the (wrong) idea that the only point of your foundation is strength. In fact, many factors contribute to the structural strength of a building. The foundations are only one piece of the puzzle. Much more important in a natural build is drainage. Whether you are using mud, wood or straw, you want to be ridding your footings of water as fast as possible, and Portland cement functions badly in this respect. It has a habit of wicking up water, and holding the damp. This is the worst news ever for a natural home, which can then suffer mold.

What to use instead? The simplest, most brilliant (in my opinion), cheapest and most effective foundation is the rubble trench.

I used a rubble trench foundation for my earthbag house in Turkey. And I can say hand on heart, if you live in an area that experiences a lot of rainfall nothing beats it. For the doubters, my house has withstood 5 large earthquakes, and is bone dry. Gautam Singh and Kim in Mumbai used the same method exactly, and it stood a monsoon with the same results. 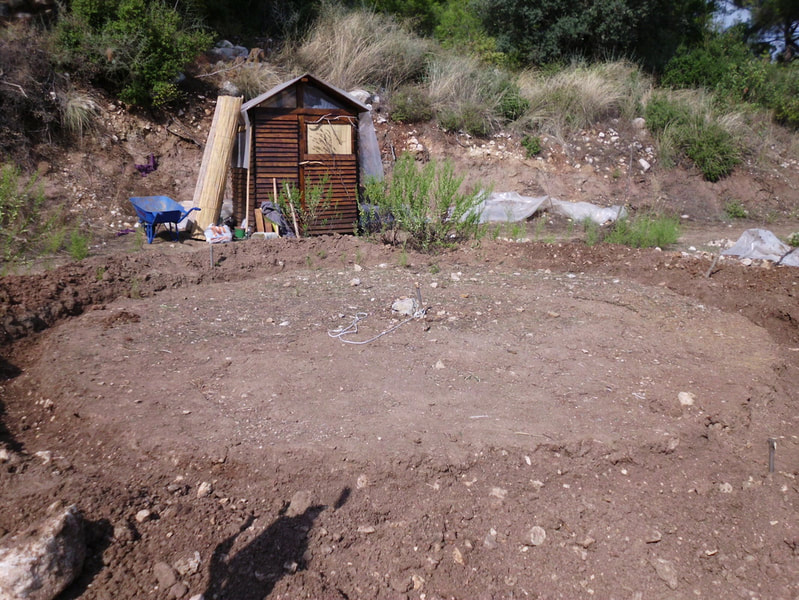 The beginning of the trench, dug by Celal and yours truly.

How to Make Gravel Foundations for Earthbag

(See bottom of post for rubble trench foundations for other natural home types).

1. Dig a trench half a metre deep. Make sure the trench is wider than the earthbags, and make sure it's sending water away from your house (i.e. it's angled downwards and away, with no dips or places for water to pool, and with an outlet point). It is better if you line it with a geotextile membrane, as this prevents the earth from seeping into the rubble over time. I didn't do this on my house as you can see, and I saw no issue after 5 years.

2. Fill the trench with rocks from the surrounding area up to about 20 cm below grade. You could slot a French drain in here too if you like, though in my opinion if you use a decent geo-textile membrane to line your trench it's not essential. The most important thing to consider is the sloping of trench. A French drain is basically a pipe with holes in it that runs at the bottom of your trench. Again, make sure the thing is sloping away from your house. 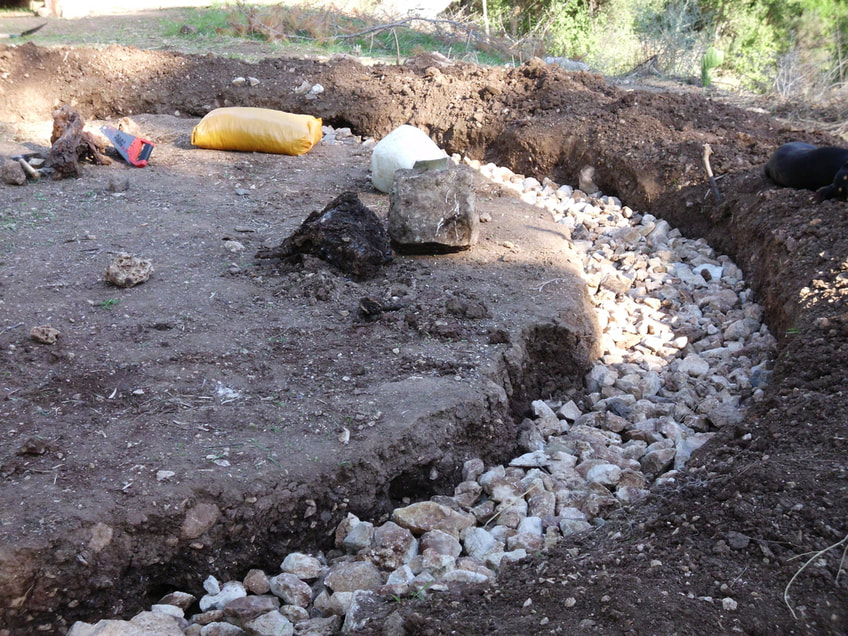 Fill your trench with rubble to act as a sieve for drainage. 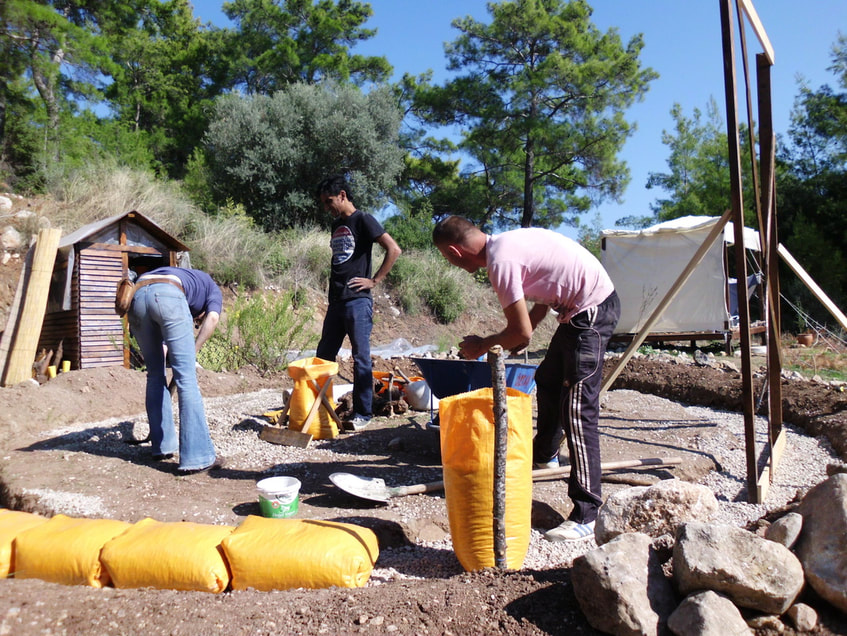 Annika, Adnan and Ahmet on the first layer of gravel bags.

Here's another earthag build we did in Turkey with a similar rubble trench foundation. 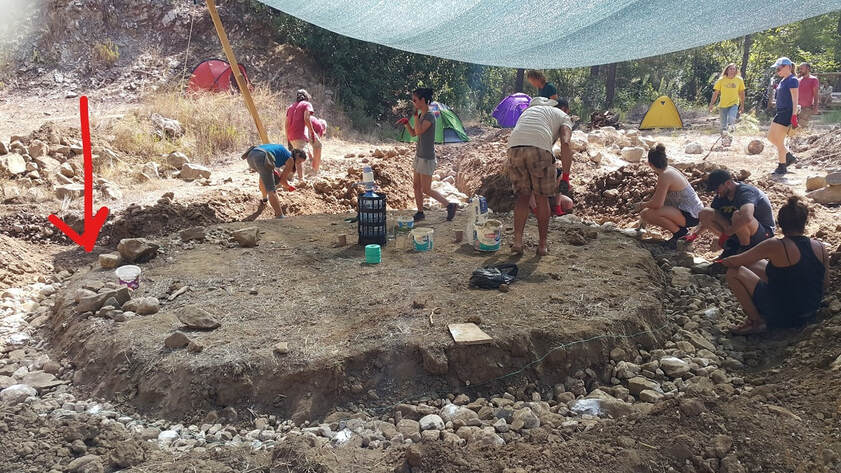 The trench is starting to be filled with bigger stones. The red arrow shows the outlet point for excess water. 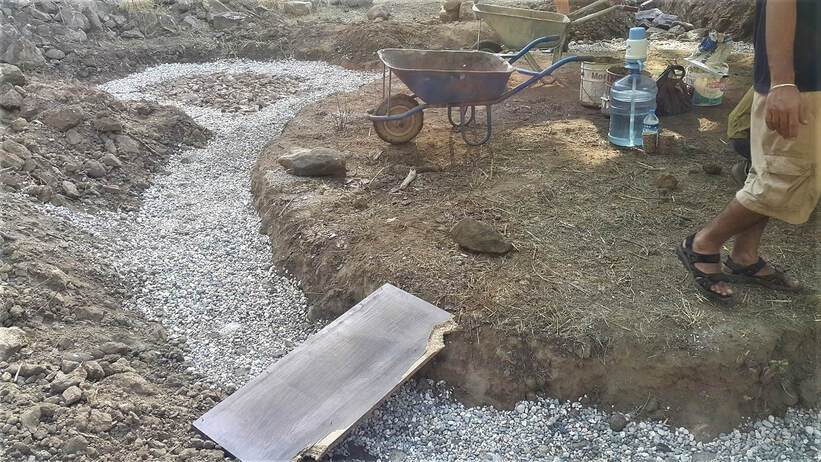 The larger rubble is covered with gravel/round edged stones. This gives the bags something smoother to rest on, and also fills in the gaps between the foundation stones and stops any movement. 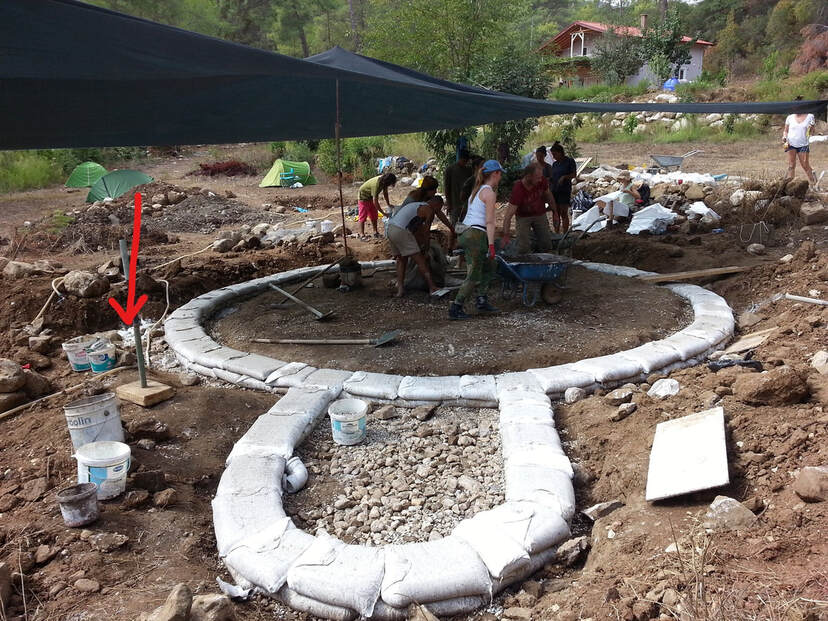 What about if you're building with cob? Or strawbale?

The process is very similar, which ever type of natural home you build. The difference comes with the stem wall. Cob, and wooden homes often rest on stem walls made of stone. But I really can't say it better than Richard Flatau, so click through to his post on the subject: Rubble Trench Foundations for other natural homes by Cordwood Consultancy 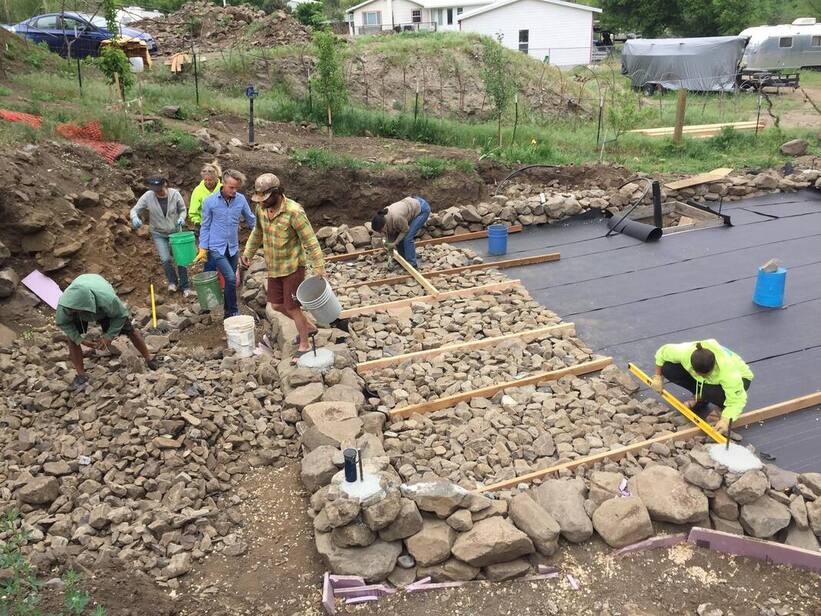 What about building regulations?

It is an unacceptable fact that building codes have been usurped by the billion dollar concrete industry, and sadly many many regulators in offices are clueless about natural building. But there has been notable push back in many countries. The rubble trench foundation is perfectly legal in the UK, and other parts of Europe, and it can also be used in the U.S with a permitted building. Frank Lloyd Wright used them extensively. So don't assume you can't do it. If you need some official evidence of the validity of rubble trench foundations, this resource endorsed by the Institute of Civil Engineers among others, may be useful.