The Basics of Building with Stone

Whilst I've built a few terraces, I hadn't built much else with stone until now, other than using it decoratively or as a type of cladding. I’m not a stone mason, and don’t have much of a clue (no surprise there). But here I am in a plot of land that is wreathed by nobbled stone walls. Small gremlins of rock lie everywhere, they mutter and clatter and trip me up, until I pay attention and work with them.

Mud is a smooth work buddy. It sticks and slides and yearns to be given structure. Stone on the other hand comes with a sturdy personality intact. “Here I am,” it says. “Now make me part of something.”

Initially I assumed I’d have to hire a mason in to do all my stone work. I probably still will for the largest cabana. But the more I play around, the more I get the hang of this rocky jigsaw game. Stone work agrees with me. It’s heavy. It demands patience and a fair bit of will power. But it gives something back. The clunk of each rock, as it finds its place, is deeply satisfying. The smell of the limestone, as one gruff face hits another, is delectable. 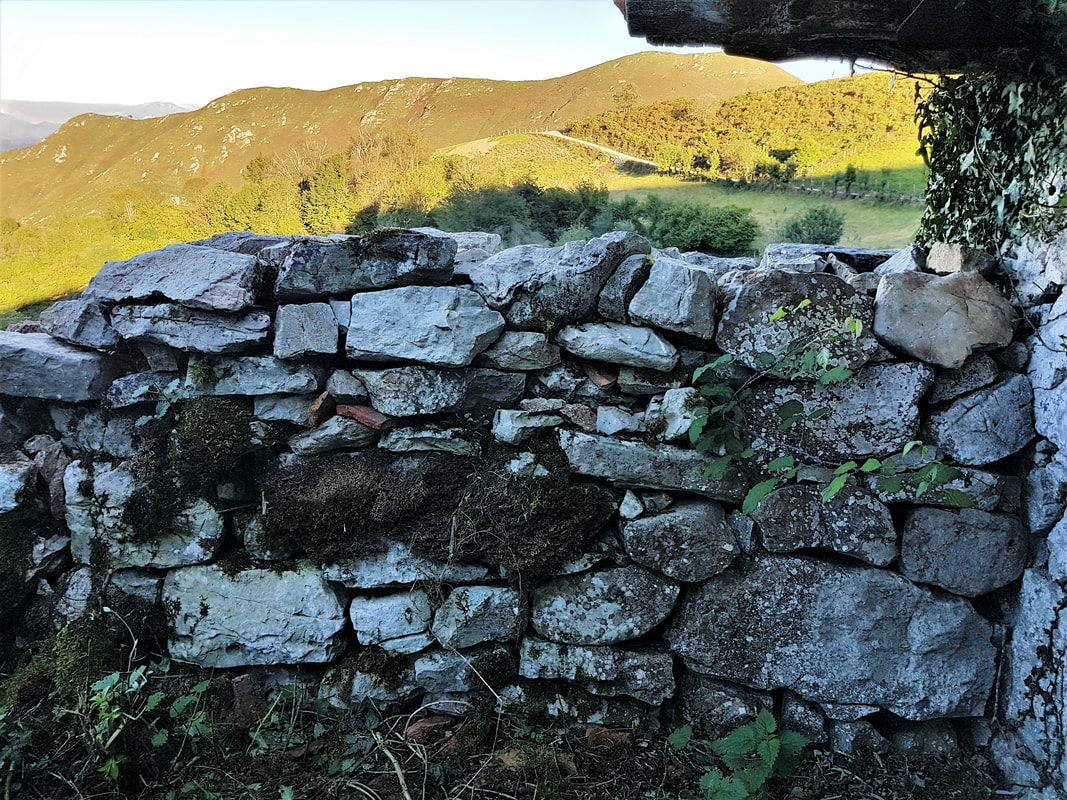 A rough, but solid start

How to build a simple stone wall

As I said, I’m still very amateur in the stone world, and my first attempt is crude. Nonetheless, I’ve studied carefully how the ancient stone walls circling my land were built, and though my progress is slow and imperfect, it's sound. The finished wall can easily take a couple of people walking on it. The process of stone wall building is roughly as follows:

1. Start at the end not the middle. The corners of your stone wall need to be formed from large, hefty immovable rocks. They act as bookends to hold the whole thing together. Make sure they’re nicely embedded in the ground. I like to dig down a little before laying the first rocks, and back-fill dirt around my first layers of stone wall to give it a nice sturdy foundation in the ground. 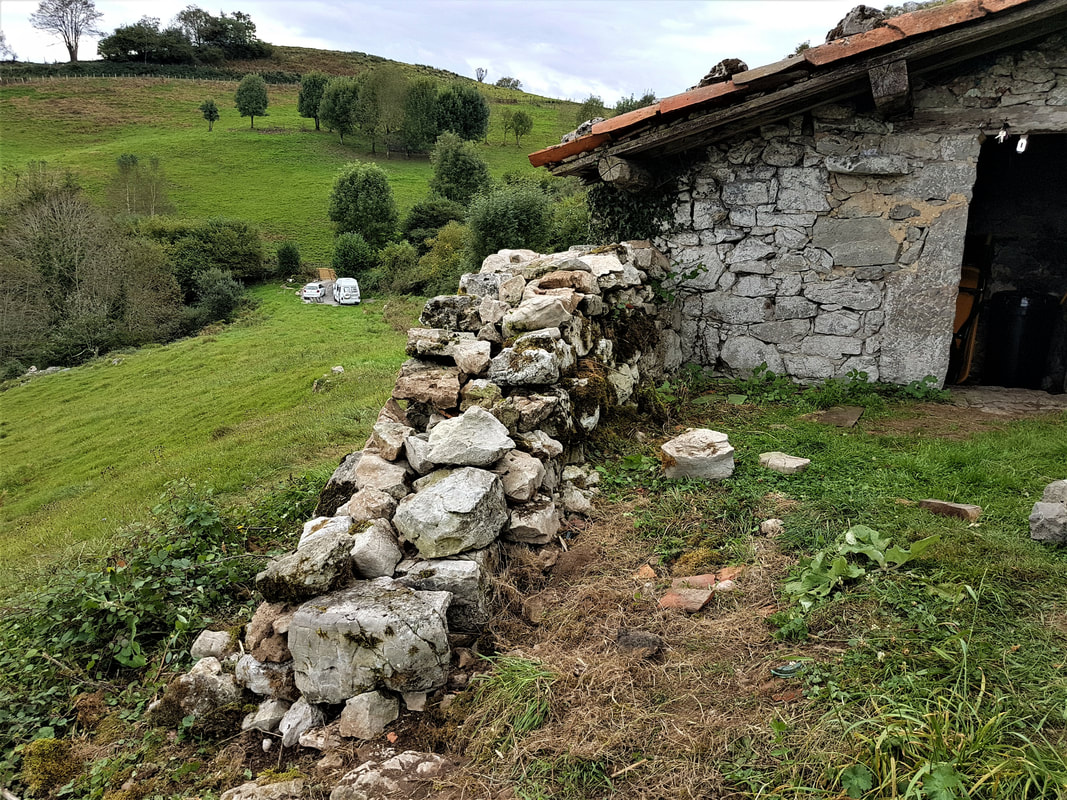 2. From your corner anchor stones, lay your first layer of large squarish rocks side by side in a straight line (if you want straight). It's better if the long edge of the rocks stretch into the centre of the wall, creating teeth that sink into the wall and lock it all together 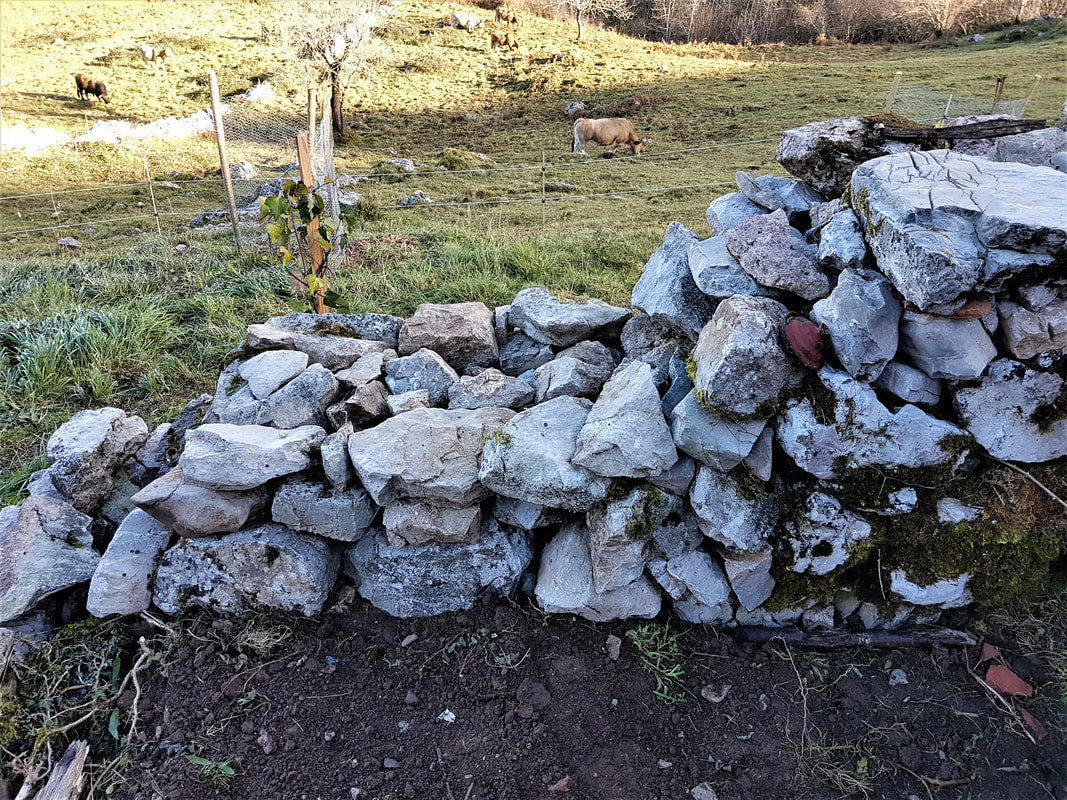 3. Wedge smaller flatter stones under the edges of larger ones to stop them moving or wobbling. Every now and again make sure there’s some overlay or staggering (like bricks in a wall) both width ways and length ways.

4. Fill the gaps around the stones and in the centre of the wall with smaller stones or rubble. These stop the larger rocks from shifting. 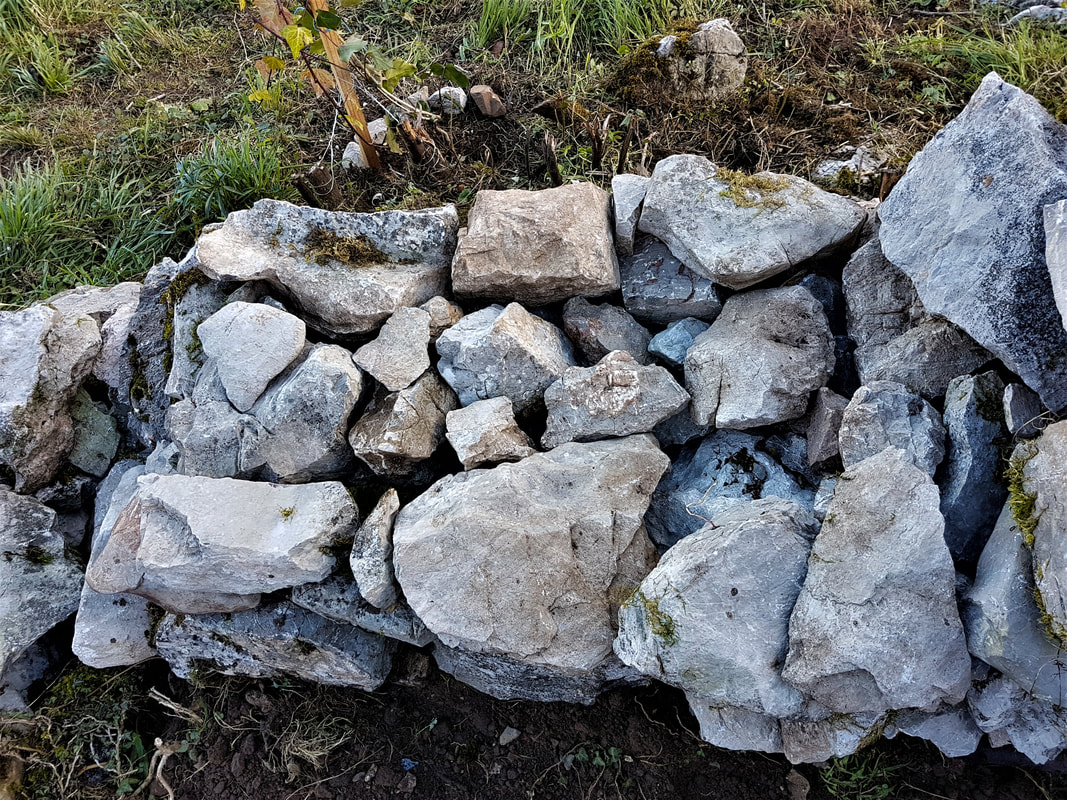 Lessons from the stones
Some of my rocks are huge. And I’m amazed that my body can move them. Yet as I discussed in my most recent book Dirt Witch, it’s incredible what our bodies are capable of if we only become more conscious and get our minds in shape. Just as with the rest of nature, there’s a magic that occurs between rock and human when we work together. If the rock wants to go, it will. And it will whisper or nudge you how to move it (or stubbornly refuse). Mostly I roll large rocks, and cantilever them into position. There's a lot to be said for levers, and downward slopes:)

Slowness
Rocks have evolved slowly. And they ask us to slow down with them. Sometimes if they are whoppers, I might only move four or five a day. But who cares? What’s the hurry? Self build isn’t some tedious chore I’m trying to get over and done with. It’s a pastime. A creative project. A partnership between myself and the stones and the dirt. It’s joyful, deeply fulfilling, and a superb way to keep fit. Mostly I only stop because I run out of steam or daylight.

There is so much to be said for taking your time. What are we doing with all this time we 'save' by motoring through everything with a machine, anyway? Natural building keeps you in shape far more effectively than some Godawful sweat-filled, noise polluted gym. It’s so much more fulfilling than watching television or losing hours on the internet. It’s like a good book, or a perfect meal, or a special conversation, and I’m in no hurry for it to end. 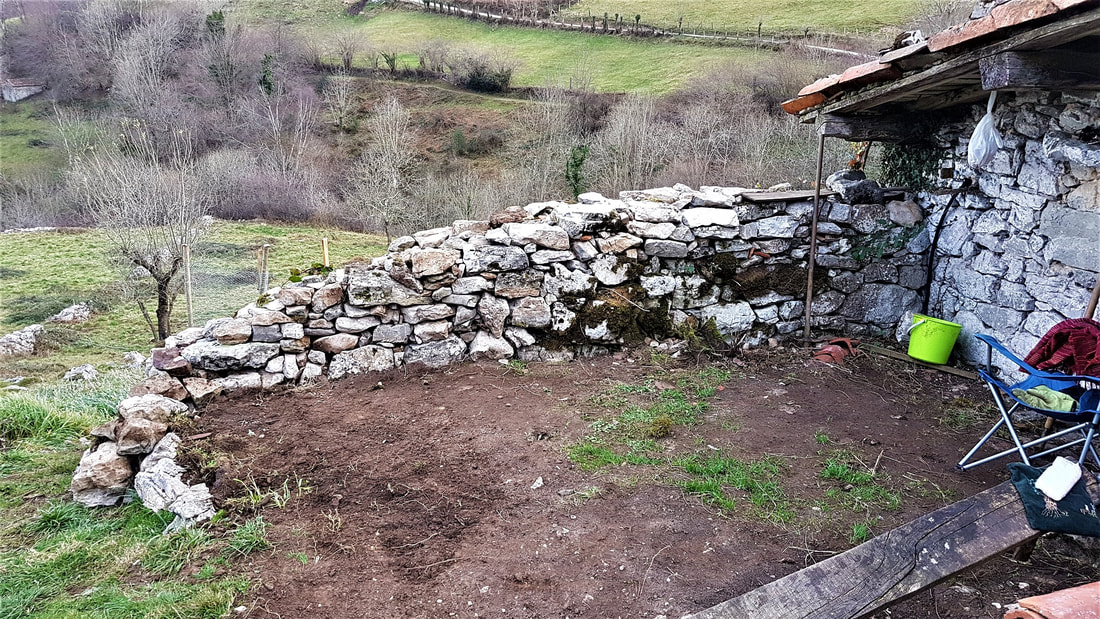 I wasn't sure I'd ever stop, but at 4 metres I decided to move to something else.
Stones and snails
I should now admit, I'm actually no paragon of patience. Despite knowing it’s pointless to rush, just like everyone, I too can fall prey to the frantic mind dictatorship. It’s winter, and snails are everywhere in my rocks, hunkering down to avoid the cold. While dismantling parts of a ruined wall, I did try to be as careful as I could, gently relocating snails. Even so, there were times my patience failed me.

The other day, I pulled one rock out to find it covered in small, fragile whorls. I groaned, and an exasperated, somewhat insensitive voice inside me muttered, “Oh it’s just tough. They’ll probably die in a few weeks anyway.” Happily, the better part of me managed to jam her foot in the door of my psyche, before I hurled the stone down onto my wall. “Leave the rock out a day. There are plenty of others to use. Perhaps they’ll move on,” the angel on my shoulder whispered.

So I did. Sure enough, the next day the snails had relocated themselves. The rock was as clean and clear as a gemstone. And I wondered when I lifted it and placed it snug on the wall, why I had felt such an urgency before, why I thought putting the stone immediately in place was more important than the lives of all those beautiful snails?

When mental plans, systems and ideologies take priority over the living beings within and beyond them, you just know things are going badly awry. We become exactly what we're trying to run from; another brutal cog in the machine, another unthinking brick in the wall. 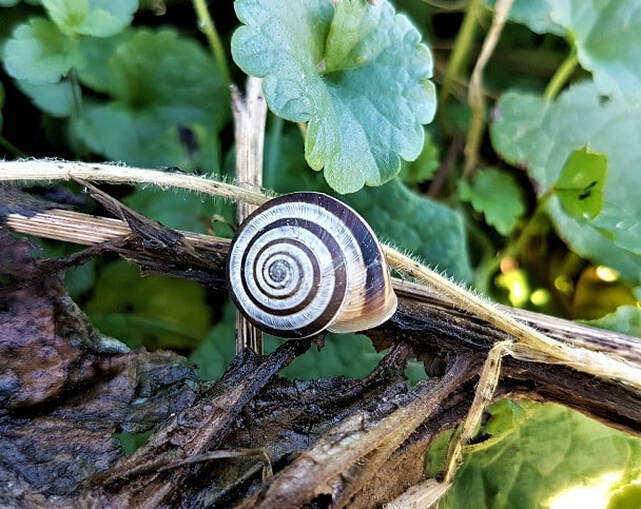 Are you sure fast 'progress' is more important than this?
How the professionals do it (VIDEO)
There's much more to stone wall building of course. I've only covered the bare bones. Here's a pretty comprehensive video which will tell you in far more detail how to go about building a stone wall. There are some very useful diagrams at about 2.12 mins in, too.
https://www.youtube.com/watch?v=Mxrip_vr6wE&fbclid=IwAR3gkqu14oGmgBFNBUKqUvhkBUee744GVZqy1cgQjRs4FGz_mgOgmK4ZdRk

Before I got my hands on them rocks
The Mud Home remains free (and ad-free) and takes me many hours a month to research and write, and is expensive to run. If you find any inspiration, useful information, or value in it, please consider becoming a patron to ensure its existence. For less than the price of a coffee you can join my private news feed where I post photos and updates of my new off-grid project I don’t want to share with the rest of the world, and ask me questions.

Many thanks to our Mud Sustainers and all those already supporting The Mud Home on Patreon. It is thanks to you these articles are still coming.
Disclaimer: All the content in The Mud Home website is provided for informational purposes only. The author undertakes no responsibility for any person or entity who chooses to use the information on this website. It is not intended to be a standard and should not substitute for the exercise of good engineering judgment by engineers. It is the user’s obligation to make sure that he/she uses the appropriate practices and consults the appropriate experts when building.
The Mud Home  Copyright © 2013  Atulya Kerry Bingham