As I wrote a little while back, Hugh Moreshead; the forest bard of Canada, has written a super book for folk trying to ditch the grind and create a mud world without a million bucks. He’s an eloquent writer, and the book covers his personal story plus plenty of tips for would-be home-builders. Here’s an excerpt from How to build ultra low cost homes and the art of living free. 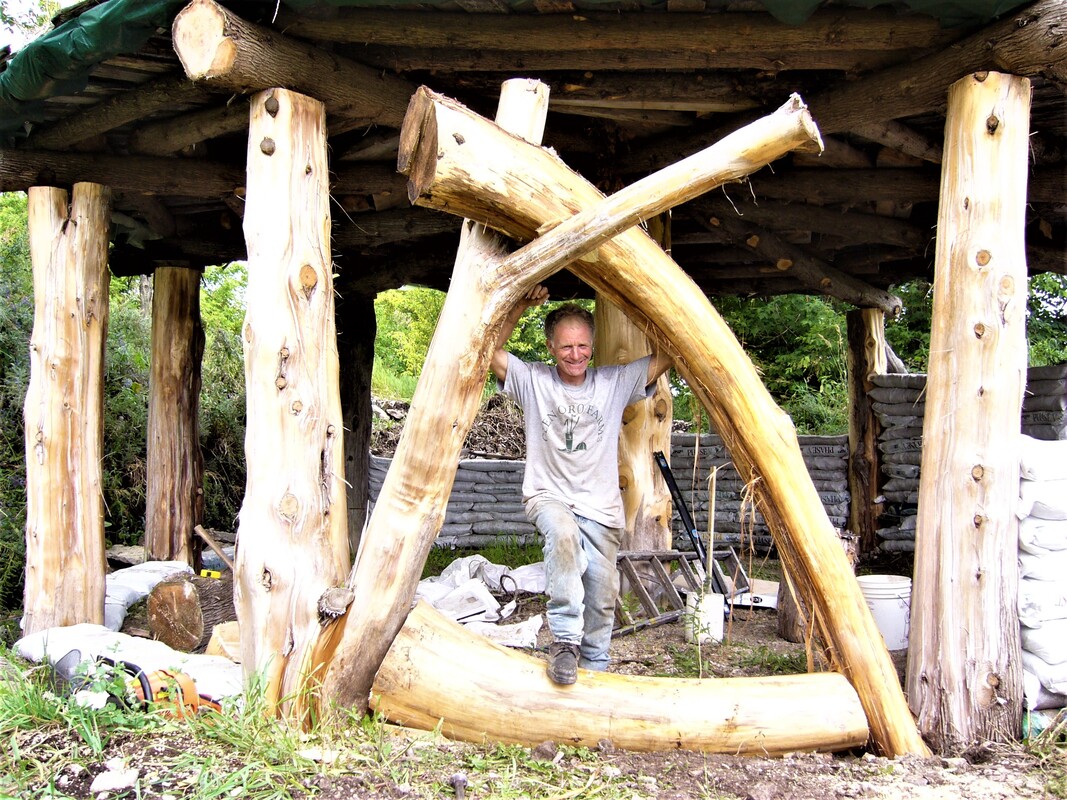 An Introduction to Building

“Out on the edge you see all kinds of things you can’t see from the center. Big, undreamed of things – the people on the edge see them first.” Kurt Vonnegut

A home must be site specific. To achieve this, you need to understand the pros and cons of all the different construction options and how to weave them into the landscape. The next step is to get up to speed on the innate knowledge that a professional builder or architect would bring to a project. The main concerns for first time home builders are: no cash, no confidence and worries about the consequences of butting heads with the laws of nature and local government. Persevere intelligently and read widely. One of those books should be The Art of War by Sun Tzu, only substitute `building` for ‘war’, skip the grisly bits, and absorb the Taoist mindset.

The battlements of bureaucracy governing home building can be as daunting as the mountains of Mordor. If you have deep pockets the drawbridge is lowered and if you don`t mind selling your soul, you are welcomed into the fold. Banks, insurance companies, architects, planning officials, the building inspector and building contractor all chip away at your life energy – and all you want is a warm bed and a roof over your head. If you do go down this road, you may realize, too late, that you`ve just taken the third exit past sanity.

Owning your own home is the surest way to independence and discovering your authentic self. Preventing home ownership by subtle and not so subtle means is how minorities and the disenfranchised are kept subjugated. There are two worlds of alternative homes: the eye candy in coffee table magazines with a flashy truck commercial on the opposite page, and then the wild and one-eyed that melts into the landscape and is found by chance after wandering lost on the internet. The defining difference between these two styles is cost. This book is about building with brain and brawn not barcodes.

Nature is a hanging judge and building codes don’t encourage the innovative; going against either may wobble your world. The skill of builders is in aligning dreams with sun, air, soil, water and gravity. We’ll discuss how to determine the best site for a home in more detail later. The immensities of the minutia surrounding building codes, inspections and permits may seem an insurmountable barrier. Take comfort with the thought that the world is undergoing rapid change and sustainable living is beginning to challenge the status quo. Tiny homes and zero-carbon construction are in the ascendancy. It takes time for regulations to overcome blinkered thinking and catch up with new ideas and ways of doing things. One road-block to change is that local governments depend upon building permits and property taxes for revenue. Imagine what would have happened if I walked into my planning office and said that I have this dream of building a house out of dirt for $56, and, oh by the way, I’ve never built a house before. To be fair, there are community health and safety concerns along with the lingering image of the architectural flights of fancy of the Woodstock generation; they called their housing, ‘shelter’, which is fine in the Californian sunshine. In central Ontario when temperatures plummet to -20°C there is no room for whimsy. If you don’t get your site and construction plans right, expect a lesson from Mother Nature.

You need to keep your building inspector’s hat on; their concerns are: structural safety, durability, energy management, moisture management, fire protection and site location. The well-informed say that a home’s true function is to balance the separation and connection between the inside and the outside. The portals between the two are the windows and doors. This brings us to the spiritual component of sustainable construction.

In Germany this spirituality is called ‘baubiologie’ or ‘building biology’. It regards a house as our third skin (clothes are the second) fulfilling a living function the same as the other two – to protect, insulate, breathe, and regulate temperature. Our skin excretes about a quarter of our body’s waste products which makes you wonder how unhealthy sealed homes are to those who dwell in them. 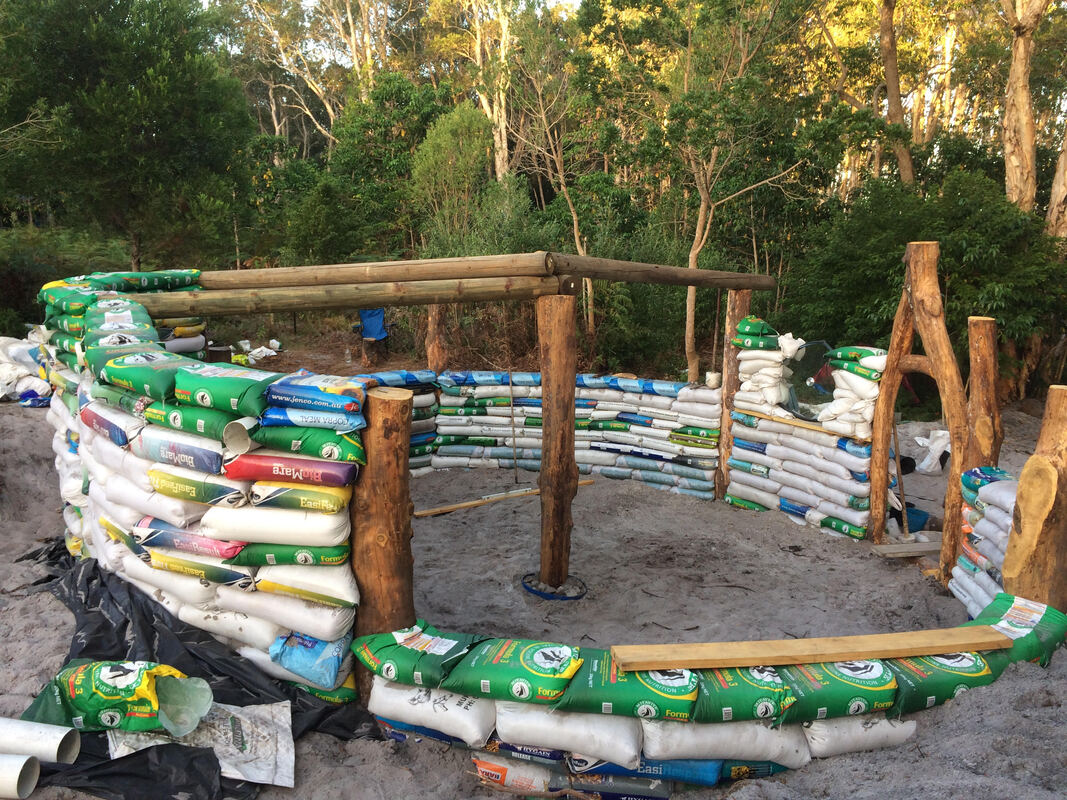 Hobbit home Hugh built at Byron Bay in Australia for the Sacred Women's camp.
I built my hobbit house over two years, and then lived in it the following year. My new home exceeded all expectations; it was warm and bright even when the temperature dipped to -20°C and equally cool and comfortable as temperatures soared. I discovered an overwhelming sense of peace and serenity that comes with living in total quietness.

I built it on a whim and my neighbour was similarly quirky, so I built one for her too. My enthusiasm was unstoppable so when a friend I’d met on the Camino asked me to go to Australia and build a hobbit home for Indigenous Elders at the Sacred Womyn’s Camp, off I went. I did have nagging doubts over the uncertainties, but these were counter-balanced by my slight inability to worry properly topped with the optimism and energy I’d gained from my own construction.
The Sacred Womyn’s Camp is near Byron Bay in New South Wales. It is a collection of tents in the bush surrounding a tarp-covered kitchen area with couches around a sacred fire burning in the center. The camp is home to Lois Cook, the eldest surviving member of the local First People’s tribe. Dominant issues there were the struggle for Indigenous rights and preserving culture. There were half a dozen people living there, including visiting elders from across Australia who were going to speak at an upcoming festival.

With barely two week’s notice, I’d gone from my cozy hobbit house in the depths of the Canadian winter to the other side of the world facing oppressive 40°C heat, jet-lagged brain and doubts of how I was going to build a house in four weeks with no apparent tools or help. My immediate concerns on the first night were that I was barefoot in snake city and couldn’t tell whether the spider darting around my tent was poisonous or not. I quickly realized that I was with deeply spiritual people and they would take care of me. Lois knew how to get things done and the first priority was to find volunteers.

I sat outside the local radio studio waiting to be interviewed. “This is 99.9 Byron Bay…fact-up radio” came over the speaker. Surfer twang made it sound rude and I smiled. The host was disappointed that I didn’t have hairy feet, but the interview did attract a handful of enthusiastic volunteers along with an excavator.

The site was low-lying scrub bush bordered by tea trees; dense jungle separated us from the pounding surf. Within days dead cypress trees were felled and logged out with a small SUV. A venomous red bellied black snake slithered out from a rotten stump as I wrapped the chain around a log. Sand from the thirty-foot wide excavation was shovelled into horse feed bags which were then placed on the wall and pounded rigid. Despite no shade and relentless heat, the building slowly took shape.

At lunchtime and in the evening, we would go to nearby Lennox to plunge into the ocean and then cross the road to wallow in the warm water of the tea tree lake. Floating in the restorative water the Elders taught me about conquest history and the New Way Dreaming.

In 1493 Pope Alexander directed European monarchs to oust all Indigenous people in the New World off their land and seize all resources; this order or papal bull has yet to be repealed. The New Way Dreaming is about transcending current harmful thought patterns and behaviors through a rise in world consciousness…I’d met others on my travels who talked of a dimensional shift. What did give me pause for thought, the Elders knew four years previously that a Canadian was going to come and help them.

We came close to getting the hobbit house built, but minor setbacks slowed construction, not least because of a bush fire on the final weekend. We had to pack everything up and evacuate the site. The next day I stayed at the Sacred Womyn’s Camp, while the others took down the tents at the campground where we had stayed overnight. This was my first experience fighting a bush fire and I suspect my attire of sandals, shorts and a straw hat would not have met with approval, however, I used my spade to good effect. I kept one eye on the tea trees, flaming like a Roman candle, which would crash randomly in any direction, and the other on the ground, fearful of angry snakes fleeing the burning jungle.
I suspect that I gained more from the experience than they did from the construction. There were many challenges. The site was in a flood plain and less than ideal; before building began, I was told to ask permission of the spirit world. The response was positive, and Lois later informed me that we’d built the home on a Song Line making it now part of the never-ending story. More about overcoming challenges in the chapter on energy. In the meantime, here’s a grab bag of building thoughts to keep in mind.

The bush fire aftermath at the Sacred Women's Camp
Buy Ultra Low Cost Homes and the Art of Living Free
Disclaimer: All the content in The Mud Home website is provided for informational purposes only. The author undertakes no responsibility for any person or entity who chooses to use the information on this website. It is not intended to be a standard and should not substitute for the exercise of good engineering judgment by engineers. It is the user’s obligation to make sure that he/she uses the appropriate practices and consults the appropriate experts when building.
The Mud Home  Copyright © 2013  Atulya Kerry Bingham